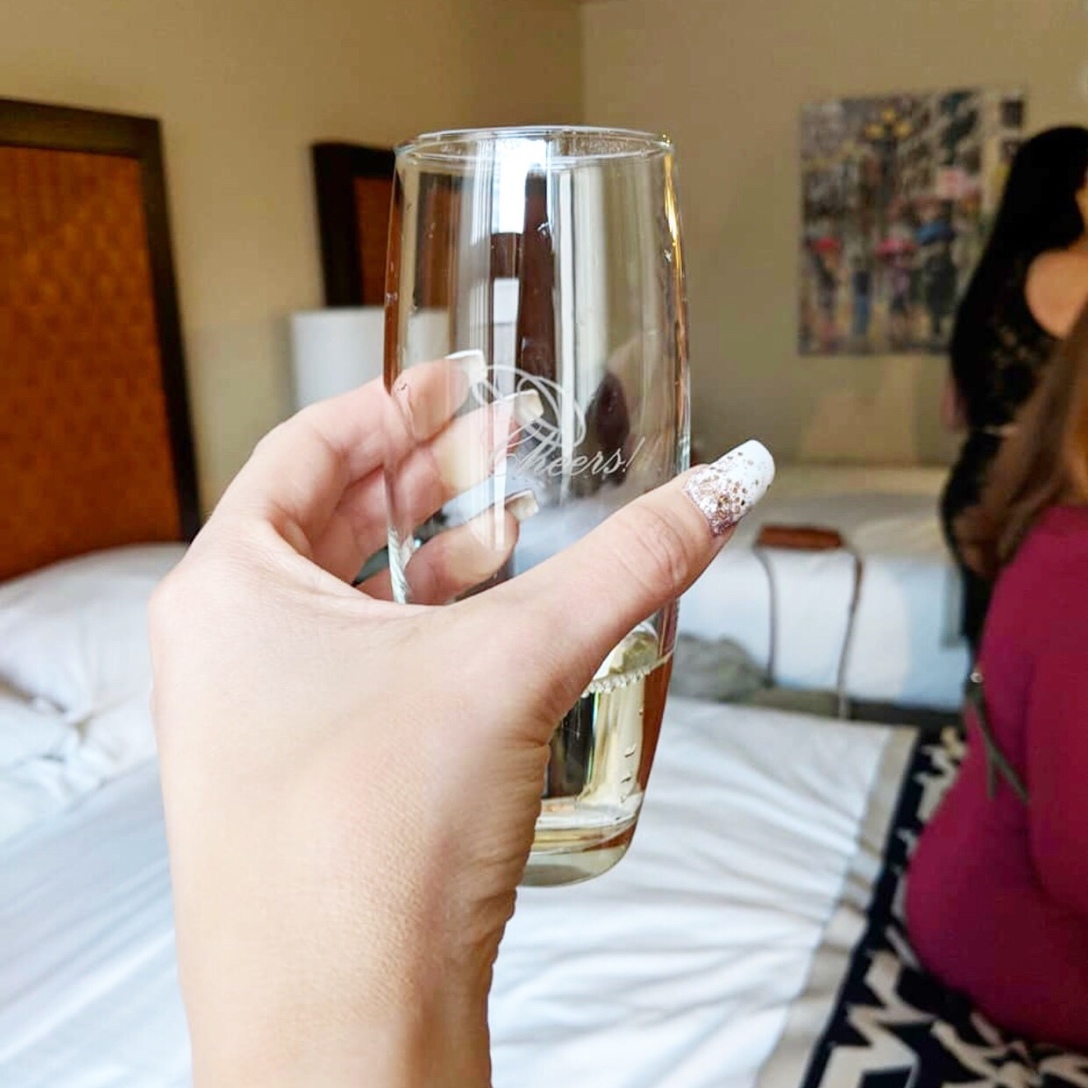 One year ago I sat around a breakfast table with my sister, my sister in law, and seven of my closest girlfriends to toast to my bachelorette party weekend and it’s success. In the loud cafeteria at Camp No Counselors Seattle we said goodbye over mimosas and departed to locations all over the country – back to our normal lives. I had made up my mind to quit drinking at the dance party the night before. I had been quietly considering it for months, wondering if I had the will power to go through with it. Somewhere between dancing the night away to Whitney Houston and standing in line for midnight nachos while drinking soda water and lime, the decision became crystal clear and easy. Camp left much to be desired, but my memories are all perfect – bunk beds and ping pong, waterslides and the talent show. Three nights in a cabin together with accomplished dynamic women taking breaks from their busy lives and careers to eat burgers in the mess hall and do bad yoga. Most of them I’ve known a decade or more – we’d come a long way from scream-singing Tenacious D songs at college house parties over shots of watermelon rum – most of us have been through a lot since then. I don’t want to say that being together again was like “the old days,” because it wasn’t. To me, it was better.

I’ll just start by saying that fifteen years is a long time to be in a one-sided relationship with something that only takes from you. Something that encourages your self loathing, and cheers for depression to root deeply inside your heart. Something that intentionally wastes your time and energy, strains your relationships and willfully stands strong and stubborn between you and your dreams and goals. I had decided I’d simply had enough of this self-inflicted bullshit.

I’ve never been someone who accepts what is “normal” just because everyone else does it. Sometimes I walk my own stubborn path to my detriment, questioning everything along the way. Critically. But this time I had recognized that for some reason the lemming in me had a thing for booze. I had fallen into the socially-acceptable catchall for life: alcohol fixes everything. Not that I believed this to be true, but on some level almost all of us buy into that narrative, otherwise we wouldn’t regularly drink alcohol. I wouldn’t drink a glass of milk because to me it represents violence, but I’d drink a beer because someone somewhere is selling me an illusion of happiness.

During this last year as I’ve put time between myself and alcohol, I’ve realized something big. We’ve been sold the idea that more money and more things will make us happier. We’re realizing that isn’t true. Each time we reach a new standard or pillar of accomplishment, we move the marker for success onto the next. If we live this way, we never reach happiness. On the sidelines of this over simplistic, capitalist equation for happiness is alcohol, working as an easy band aid when the rest of what we’ve been promised falls short. And it will always inevitably fall short. I believe that being truly happy requires so much more effort than buying something new and washing your guilt and lack of satisfaction down with a beer at the end of a long day. But I haven’t always felt this way.

Over my bachelorette party weekend I had several epiphanies. The most influential in my decision to quit drinking had to do with the company I keep. I could count on one hand how many alcoholic drinks I had over the course of my five-day party. As I quietly contemplated my decision to quit altogether I realized that I was having just as much fun without alcohol as I have with it (if not more). And then it “clicked.” Instead of drinking to “suffer” through events I attend out of a false sense of obligation, or drinking to “tolerate” people I do not wish to be around, I should stop wasting my time and life and just stop. Stop going and stop doing out of obligation and/or guilt. Give myself the emotional permission to create more time in my life by just saying no. If I don’t want to go, or I don’t enjoy the people, I shouldn’t be there. If I feel like I “need” alcohol to “have fun” then I am clearly using it as a band aid for a bigger problem: I am wasting my life doing things that do not serve me or my real happiness and that makes me unhappy. The other epiphany I had was that when you’re around your real people, the ones that give your life joy and meaning, alcohol is not just unnecessary, it can be a detriment to really experiencing your time together. And our time here is short.

Time. That is a topic I’ve written often about, and after discovering Andy Ramage and the company he co-founded: One Year No Beer, all the benefits of not drinking that I had struggled to articulate became clear. I was rarely a binge-drinker. I considered myself to be a moderate drinker, usually enjoying a beer or two a night after work “to relax.” My husband was the first one to point out to me that I shouldn’t need alcohol to relax, and that perhaps I should spend more time contemplating why I’m so unrelaxed in the first place. I met his ideas with stubborn resistance. I’m not an alcoholic. I work hard. Why shouldn’t I be able to have a beer at the end of a long day? I still, even now do not think that I have or had an alcohol dependency. What I did have was what Ramage talks a lot about: A bad habit that drains my energy while simultaneously sabotaging my physical and mental health. A habit that I engage in without question because society encourages it and deems it “normal.” And a habit that will always keep me from reaching my true and full potential because it is a huge waste of my time. Alcoholism aside, that just sounds terrible.

The focus of One Year No Beer is on the moderate drinkers. Those of us that do not consider ourselves extreme enough cases to need serious intervention or assistance, but who would benefit greatly from being part of a community of other people who just don’t want to drink anymore. Who recognize the untapped potential in a life and mind that isn’t constantly clouded or depleted by alcohol. Those of us that recognize that being an American should consist of more than working and drinking in an attempt to find happiness. Because most of us grew up living this model and are now realizing it’s pitfalls and failures. And we want more from our lives than a cycle that supports a general feeling of malaise.

Once I made the decision to quit drinking, I began to truly recognize how deeply alcohol is ingrained in our daily lives. When was the last time you stopped drinking for long enough to enjoy the physical and mental benefits of a body free of alcohol? From the research I did, the general consensus is that it takes at least two weeks to begin to feel the physical and mental benefits. Much longer if you want to experience things like long-term career or fitness boosts. Most of us will never experience this since we begin drinking as teens and continue on some level, forever. This shocked me to think about. Would I really never let myself experience my full potential because I like beer? That felt absurd.

One thing that the OYNB movement emphasizes is that the benefits of not drinking snowball tremendously. And after a year, I can attest to that. Time seems to multiply because every late night, every hungover or tired day, and every event I did not want to attend simply vanishes and can be replaced by other more fulfilling activities. Sleep improves, energy levels improve, depression and anxiety decrease, workouts are more effective, and work is more productive. Instead of struggling through a full day at moderate productivity, I find that I can complete more meaningful work on my business and personal endeavors in less time. Making time for even more meaningful relationships, goals, and activities. My husband and I have a stronger relationship (he quit too), and I believe that our decision to omit alcohol from our marriage will help us to focus our energy on positive endeavors and leave aside all of the complications and traps alcohol brings into relationships.

But it’s difficult to get that snowball rolling. Between the social event excuses, the work event excuses, and the “wine-o-clock,” “mama needs a beer,” and “life is better day drinking” t-shirts, alcoholism has become so pervasive in our culture that to not drink makes you somewhat of a social leper. My interest specifically on the strong emphasis on moms and females self proclaiming their drinking habits as a “funny” way to cope with our lives fascinates me, but that topic is for another day. As a meme I once read so accurately put it: “Galentines Day is not a thing. You’re an alcoholic.” And as someone who would have scoffed at that comment in a past life, I see it clearly now. Alcoholism has taken on a much more female tone recently- “I’m on a juice cleanse, and by juice I mean wine.” Normalizing drinking, emphasizing it’s importance in our social lives, and excusing our “need” for alcohol is not only shocking, but indicative of a culture that is starved for meaning. So I am happy to leave it behind forever.

Popping that special bottle of champagne my best friend brought and toasting to us, the round table of strong women felt like a break up. An empowering and permanent celebration of acceptance, surrounded by my biggest supporters. I’m leaving alcohol behind and beginning my new life with a different perspective – life is short and I refuse to waste it.