I went to my first tattoo appointment about four years ago, alone. I felt like I was being unreasonably impulsive to get it when Kanan was out of town working even though I had a consultation prior, and had been mulling over one of the ideas since I was sixteen years old. At this point I figured it was now or never, but for some reason I felt irresponsible, like a teenager making a choice they can’t take back. But if I’d had the idea for a decade, it probably wasn’t going to change. I had booked out months in advance for the artist’s soonest availability and he called me with a cancellation. Honestly, I’m not the fondest of needles but at this point I was so ready for new beginnings it didn’t matter to me. I had convinced myself that whatever pain I’d feel could only be a significant improvement over the last few years. 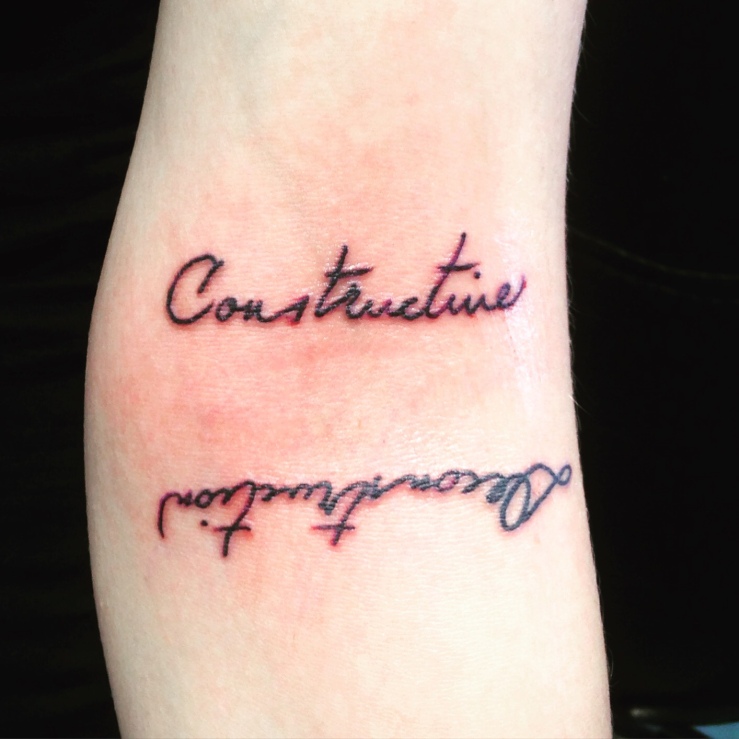 I had the idea to get the words “Constructive Deconstruction” tattooed on the inside of my left arm the first time I read Lullaby by Chuck Palahniuk, about ten years prior. In my previous post Why I’m Vegan Part 1 I go into detail about how the book influenced me to research factory farming and animal welfare, ultimately resulting in me becoming a vegetarian, and years later, a vegan. It had changed my life significantly when I was just sixteen years old, the protagonist’s mantra, the thread that tied the story together: Tear it down to rebuild. Constructive Deconstruction. If that idea made sense to me then, it’s crystal clear now.

Fast forward to college. I was taking one of my many Women’s Studies classes and we were assigned an essay by Audre Lorde. Her paper Age, Race, Class, and Sex: Women Redefining Difference would drive the “Constructive Deconstruction” point home with a intersectional feminist perspective so powerful, I took it as a sign that I had to carry those words with me permanently.

“The future of our earth may depend upon the ability of all women to identify and develop new definitions of power and new patterns of relating across difference. The old definitions have not served us, nor the earth that supports us. The old patterns, no matter how cleverly rearranged to imitate progress, still condemn us to cosmetically altered repetitions, of the same old exchanges, the same old guilt, hatred, recrimination, lamentation, and suspicion.

For we have, built into all of us, old blueprints of expectation and response, old structures of oppression, and these must be altered at the same time as we alter the living conditions which are a result of those structures. For the master’s tools will never dismantle the master’s house.”

It gives me chills to this day even though now I have all but memorized it.

That first tattoo will always be the most deeply meaningful to me – it has become the mantra for my own life, giving me conviction to push forward and pave my own path through the pieces. Knowing that real change grows out of complete deconstruction gives me power. Knowing that I do not want to reform, and that I do not define the master’s house as my only source of support empowers me still.

On that same day I got another tattoo that I believe is the counterpart to the constructive deconstruction idea: “Give me a reason to care, I’ll sing along forever.” A Bouncing Souls lyrics from their song Sing Along Forever on their 2003 album Anchors Aweigh. The script is my Grandma Brown’s handwriting, pulled, pieced together and traced from birthday cards and book inscriptions. She always encouraged me to read and learn, to do my own research and refuse to believe anything just because it was told to me. So I made a deal with myself. If I’m going to try to live a progressive life, if I’m going to tear things down to rebuild, I’m going to be open to the truth. I’m going to be willing to learn painful things and to relearn uncomfortable realities. I’m going to change the way I live when I learn my privilege. I’ll try my best to know better and actually do better. And if you give me that reason to care, I’ll make it one of my life’s goals to sing about it forever. Because what are ideas without action? 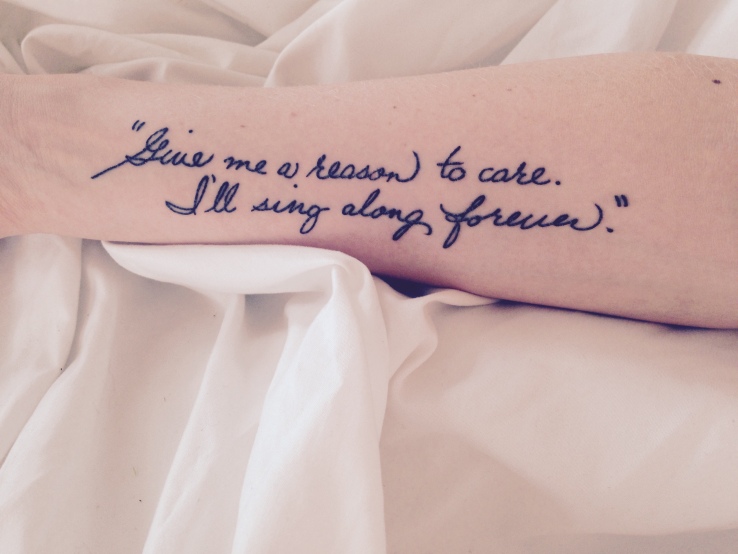 I got my next tattoo a couple of years later on what I now call my “vegan arm.” I mean, my whole body is vegan, but my left arm is just more vocal about it. (Ha. Ha.) I essentially entrusted my new tattoo artist to create a half cow, half dog portrait with the words “Have courage and be kind” framing their sweet faces. And the work she did is perfection. We used a picture of a beautiful cow I found online, and a picture of my adorable border collie Moose. Connected with a flower crown, but split down the center, it’s meant to represent the idea that we’re all in this together, and we all have a responsibility to each other on this planet. Everyone’s soul matters, and the value that humans place on life is arbitrary and ignorant. I believe that everyone should have the right to their own life, and it shouldn’t be our choice to take it, no matter the species – they are a someone. The ironic part about this is that animals know this already, and they should be our teachers. They know how to be kind, and to only take life when necessary. It’s us humans that can’t figure that out. 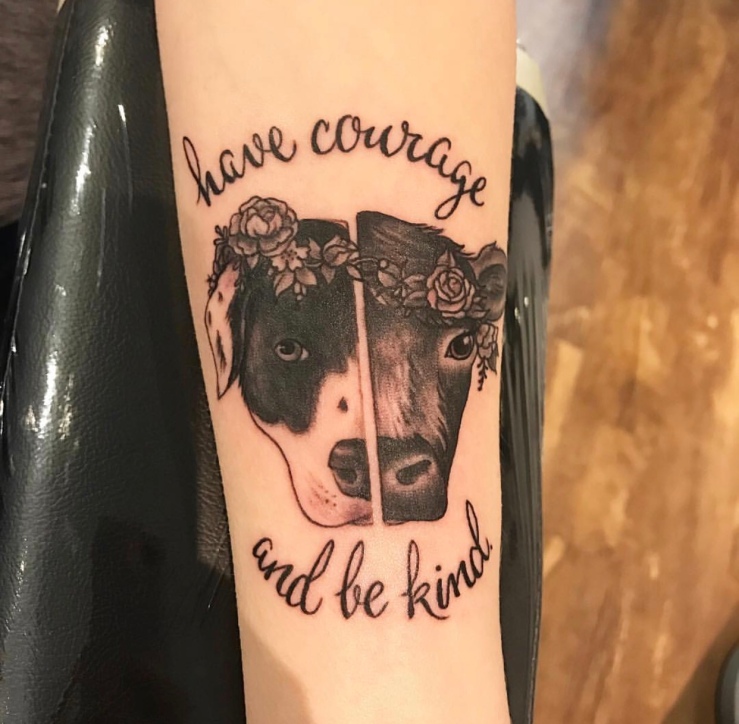 I used the quote “Have courage and be kind” because it’s from one of my most favorite Disney movies: Cinderella. The remake. Her mother gives Cinderella this last bit of advice to her before she dies, and to me it’s simple but so complex. It’s something that I need to be reminded of daily, because having courage is only half of the equation. Finding a way to be kind in this life, to me, is the hard part. Not letting the world harden you as you discover inequalities and injustices, but being wise enough to push forward toward change with kindness in your heart and the belief that the world can be better. Hope. Knowing that kindness begets kindness, but you must have the courage to speak up and work toward change.

There’s a scene in the movie where the prince is hunting a stag and stumbles upon Cinderella on her horse in the woods.

Cinderella: “What’s he [the stag] ever done to you that you should chase him about?”

Prince: “I must confess I’ve never met him before. He is a friend of yours?”

Cinderella: “An acquaintance. We met just now. I looked into his eyes, and he looked into mine and I just felt that he had a great deal left to do with his life, that’s all… Please don’t let them hurt him.”

Cinderella: “Just because it’s what’s done doesn’t mean it’s what should be done.”

She shifts his thinking of the stag as a thing, to a someone. With kindness. To me, there’s nothing better than working toward that balance.

The most recent tattoo I have also has a complex story. In 2012, Laura Jane Grace, the lead singer of one of my favorite bands, Against Me! interviewed for Rolling Stone Magazine, explaining she was transgender. I kept the magazine because it was revolutionary at the time and to me, she was so brave to announce to the world that she would be identifying as a woman moving forward. I also thought it was great journalism.

Over the years I’ve gone to a few of their amazing concerts, but actually had the opportunity to meet her in person at Humboldt State University at a small acoustic show she played for around $20 a ticket to promote her book Tranny. Which is amazing. I brought my magazine from years prior that I dug out from under a million books and papers, with the off chance she might sign it for me. And she did, with one of my favorite lyrics: “There is an ocean in my soul where the waters do not curve.” I had my new tattoo artist place this on the back of my arm, opposite my Bouncing Soul’s lyric on what I now call my “punk rock arm.”

To me, the song The Ocean represents the undying persistence to discover your true self. It represents the not-giving-up during the tumultuous repetition of life that attempts to strip you of yourself, but in doing so makes you more authentically you if you let it. It’s about that night at their concert playing The Ocean when my sister and I knew it was that exact moment where the crowd would move from jumping in symbiotic unison to violently tearing through each other in an instant, so in a half second we grabbed each others hands and held on tight. It’s the strongest and the calmest. It’s the most volatile and yet the most flexible. The ocean grounds itself around whatever obstacles appear, while ultimately being uncontrolled.

“There is an ocean in my soul, where the waters do not curve.”

View all posts by thereallifeveganwife